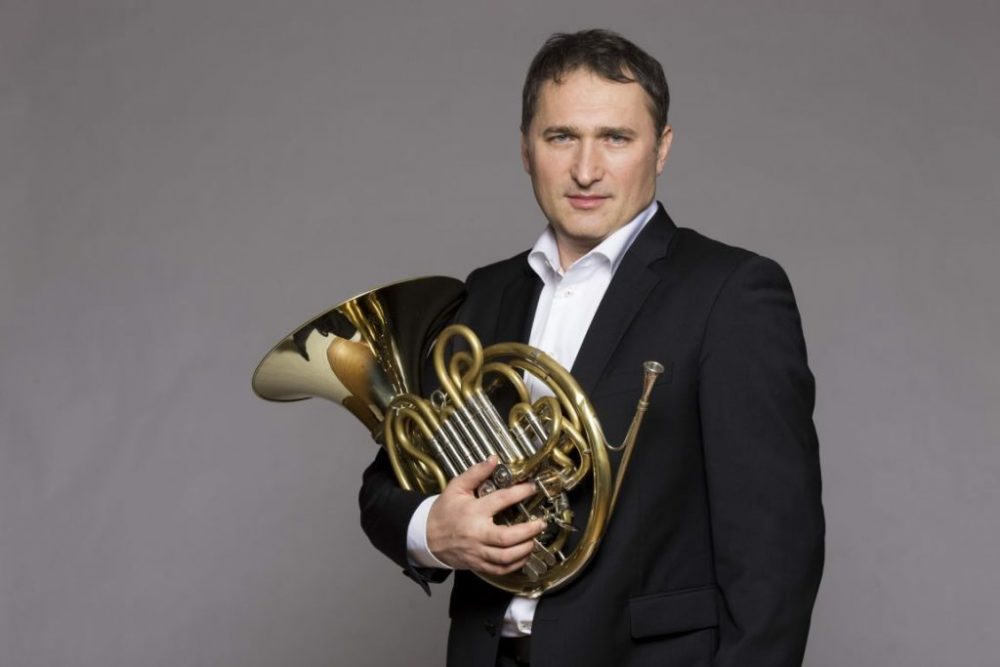 KONSTANTIN TIMOKHINE – French horn (Ukraine – Switzerland)
«…Hornist Konstantin Timokhine proved to be a sensitive, colorful and courageous musician with an amazingly soft, restrained sound»… «Südkurier» (Germany).
Konstantin Timokhine was born in 1973 in Kiev (Ukraine). At the early age of seven he was admitted to the Lyssenko Special School for Music where he studied horn, violin and piano.
Further studies at the Kiev State Conservatory and at the Geneva Conservatoire Superieure de Musique. There, apart from conducting and chamber music, he studied the horn with Bruno Schneider, achieving the Diploma for Solo Performance with greatest distinction. He continued his studies at the Hochschule für Musik und Theater Zürich with David Johnson, receiving another Diploma for Solo Performance. Additional studies for baroque and natural horn followed with Glen Borling.
Konstantin Timokhine won the first prize of both the International Horn Competition in Minsk (Belarus) and the Competition CNEM Riddes (Switzerland).
At the age of 17 the virtuoso soloist made his debut with the Ukrainian Youth Orchestra on a concert tour in Japan. He continued playing successfully as a horn soloist throughout Europe with various symphonic orchestras, performing horn concertos of W.A. Mozart, J. Haydn, L. Cherubini, R. Glière, E. Bozza and C.M. von Weber. Across the globe Konstantin Timokhine performs with chamber music ensembles such as the Colorado String Quartet (USA), Ensemble Fidelio and Contrechamps Genève, The Yofin Baroque Ensemble Zurich and Il Giardino Armonico. He appears on the side of Cecilia Bartoli on the Stage as a soloist with her Grammy awarded “Sacrificium” Program. Also
After being the solo hornist in the Geneva Chamber Orchestra and the St. Gallen Symphony Orchestra and hornist in the Zurich Opera Orchestra, he is now the principal horn player in the Basle Chamber Orchestra, touring regularly with internationally renowned soloists and conductors, performing in all the world’s large concert halls.
Habitually he plays as solo hornist in the Orchestra Ensemble Kanazawa (Japan), with the Musiciens du Louvre under Mark Minkowski (France) and the Giardino Armonico (Italy) under Giovanni Antonini.
His extraordinary musicality enthralls audience and press alike.
Konstantin Timokhine has recorded for several prestigious labels such as Sony and Naïve, as well as for various radio stations.

Erki Pehk was born in Võru, Estonia in the family of Heino Pehk, an established music teacher and choir conductor. Erki started learning music (piano) at age six at the Võru Music school. In 1982 he moved to Tallinn for the piano and choir conducting studies at the Tallinn Music High School. After graduating in 1986 he started to study choir conducting with Prof. Ants Üleoja and orchestra conducting with Peeter Lilje at the Tallinn Conservatoire (now Estonian Academy of Music). At the same time before his graduation in 1993 he studied orchestra conducting at the Jāzeps Vītols Latvian Academy of Music with Paul Mägi (years 1992-1994). Erki Pehk has improved his musical skills in Kirill Kondrashin Conductors Masterclass in 1990 in Hilversum (teacher Hiroyuki Iwaki), then at the Interpretation Course in Stuttgart led by John Eliot Gardiner in 1991 and also in the opera course at the Guildhall School of Music and Drama in London with Prof. Mauritz Sillem in 1997.

Since 2001 Erki Pehk became the artistic director of Klaudia Taev Competition for young singers in Pärnu, Estonia. He had the idea to produce the opera production as the main prize for the winners of the competition. After the first production Rigoletto in 2003, due to the increased program capacity of the competition, he decided to create Pärnu International Opera Music Festival – PromFest in 2005 and remained the artistic director of it till present time. During all this time after Rigoletto he has produced and conducted The Demon (2005), Carmen (2007), Thaïs (2009), Attila (2011), Tsar’s Bride (2013), Aida (2015) and La Traviata (2017).

Erki Pehk has been the Permanent Guest Conductor of The Symphony Orchestra of the National State Television and Radio Company of the Republic of Belarus [2] 2009-2017. The most active collaboration he has with the Kaunas State Musical Theatre (since 2011) and with the Ukrainian National Chamber Ensemble “Kyiv Soloists” (since 2016). Also he has built up his reputation as an orchestra and opera conductor performing throughout the Europe with music theaters of France (Opéra de Rennes, Angers-Nantes Opéra, Lithuania (Kaunas State Musical Theatre), Germany (Erfurt Theater), Bulgaria (Burgas and Varna Opera), Belarus (National Bolshoi Opera and Ballet Theatre), and working in Germany, the Netherlands (including gala concert in Amsterdam Concertgebouw with Nederlands Opera Studio), Finland, Russia, Ukraine, Latvia, Hungary and France.